The Player Info Guides that we provide the college coaches are the most detailed & accurate booklet anywhere! Every player is required to complete a player profile sheet the info provided is put into our booklets which are organized and typed out.

In 2009 Jordan Hooper (Nebraska) helped guide Team Runza to the semifinals of the Miss Basketball Showcase and was named a Miss Basketball All-American. Hooper went on to be selected first in the second round (13th overall) by the Tulsa Shock in the 2014 WNBA Draft.

Carla Bennett, was drafted by the Minnesota Lynx in the third round of the 2003 draft.

Megan Mahoney (Kansas St.), the 2000 Showcase co-MVP, was drafted in the third round of the 2005 WNBA Draft by the Connecticut Sun.

Brittany Wilkins, an Arlington, Neb., native who played for the Daubert Pinnacle Nebraska All-Stars in the 1998 & 99 Showcase (and later for Iowa St. University), signed as a free agent with the Sacramento Monarchs and went on to play professionally overseas. 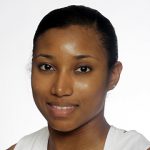 (left) Ketia Swanier was the 12th player taken in the 2008 WNBA Draft by the Connecticut Sun. The UConn point guard was a 2002 Miss Basketball All-American. She teamed with LSU forward Ashley Thomas, to lead the Georgia Magic Black to the quarterfinals of the 2002 Showcase. Both players were key players as UConn & LSU both reached the NCAA Final 4 in 2008. She averaged 7.3 points per game as a senior.

With participants from all over the country, it is difficult to keep tabs on every kid from every year, therefore, the following list is not complete. If you know an athlete that participated in the Showcase that is not listed below, please let us know. We only list those who have signed or play at NCAA Division I programs due to the difficulty in tracking the signings with smaller schools, and the very large number of kids from the Showcase who are playing at DII, DIII, NAIA and junior colleges.

This is a partial list of alumni we are aware of who have gone on to compete for NCAA Division I programs across the country.